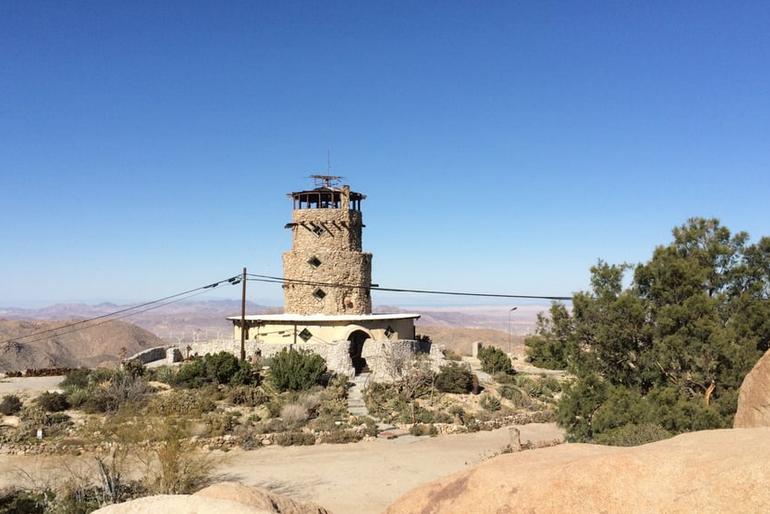 The tower is at a 3,000 feet elevation near the town of Jacumba, approximately 70 miles east of San Diego and 45 miles west of El Centro. Constructed out of cut-stone, the tower stands four stories tall. It was built in 1922 by Bert Vaughn, a real estate developer who once owned the town of Jacumba. 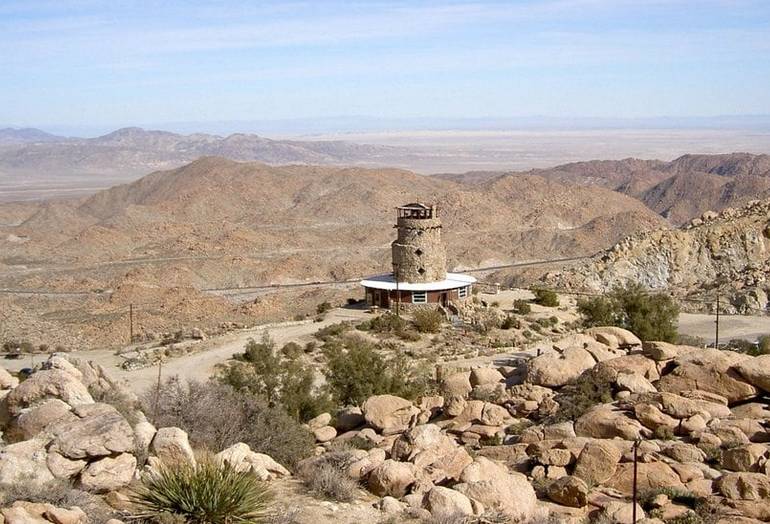 Desert View Tower was constructed over six years and completed in 1928. The tower base is solid rock, which proved to be strong enough to survive a year of the fierce desert wind and the blasting to construct the adjacent Interstate in the 1960s.

Vaughn created the tower in memory of early pioneers who labored to travel across the desert. It took about 30 days to make the trek between Yuma and the Pacific Ocean, with desert temperatures reaching over 110 degrees Fahrenheit on the hottest days. Such travel is almost unthinkable now, with our air-conditioned vehicles. 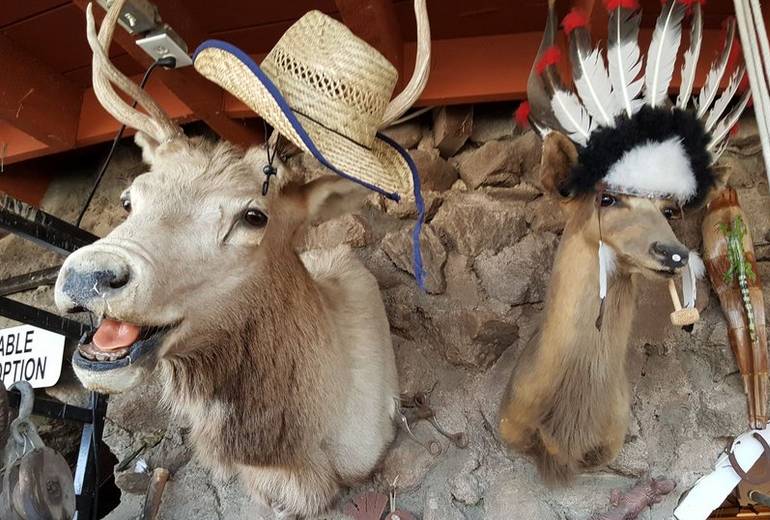 The interior of the tower has some museum-like displays as you walk up the stairway. They hold a collection of “Desert Americana” items, such as Native American-inspired blankets, taxidermy animals, newspaper clippings, and other ephemera.

Views from the Desert Tower let you see into Mexico, across the desert, and even to the Salton Sea on a clear day. There is a telescope in the tower that takes quarters so you can have an even closer look. You are likely to be surprised just how quiet the desert is, with the occasional punctuation of noise from passing cars. 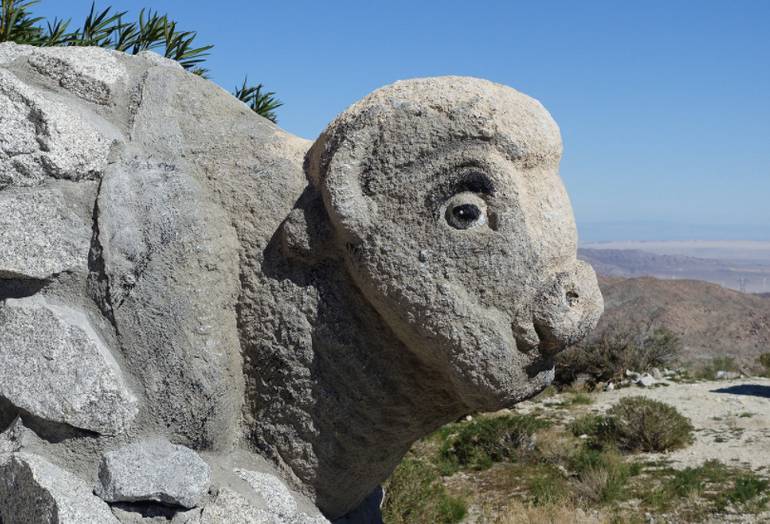 Boulder Park is adjacent to the tower, a collection of wind-weathered rocks that form a network of caves and walkways. Along the sidewalks are unique hand-sculpted animals and faces that were created by a Depression-era folk artist, W.T. Ratcliffe. He took two years to complete the artwork.

These quartz granite creatures have been painted in some areas to accentuate their form further. Animals include buffalo, bears, birds, and some animals that you may have to use your imagination to figure out. 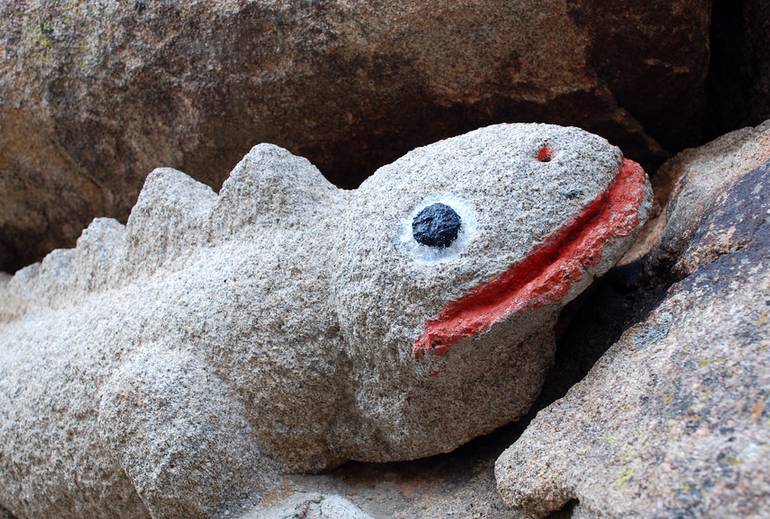 Kids love exploring the boulders, paths, and animals, and if you have been on the road for a while, it’s an excellent place for kids to expend some pent-up energy.

Adults also enjoy the fun of bouldering and exploring the craggy wind-blown caves. It brings out the kid in even the grumpiest adults. This is also a fun place to snap a few family photos for the album or the holiday cards. 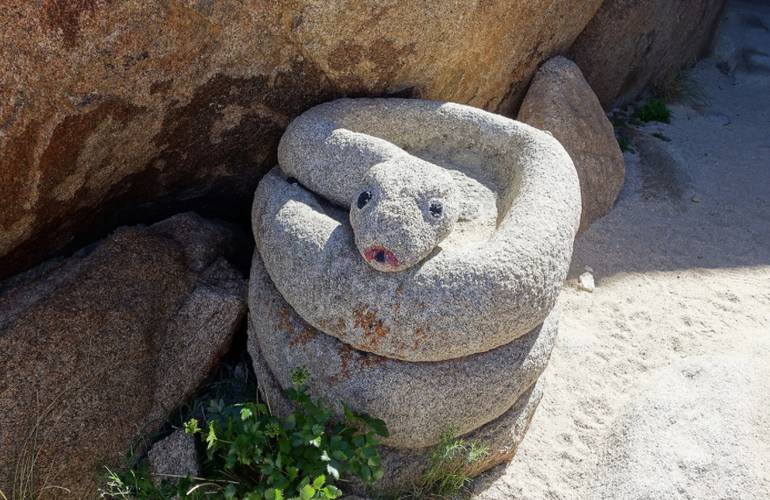 There is also a desert spring on the property which boasts vegetation that you would not typically expect to see in such an arid area. 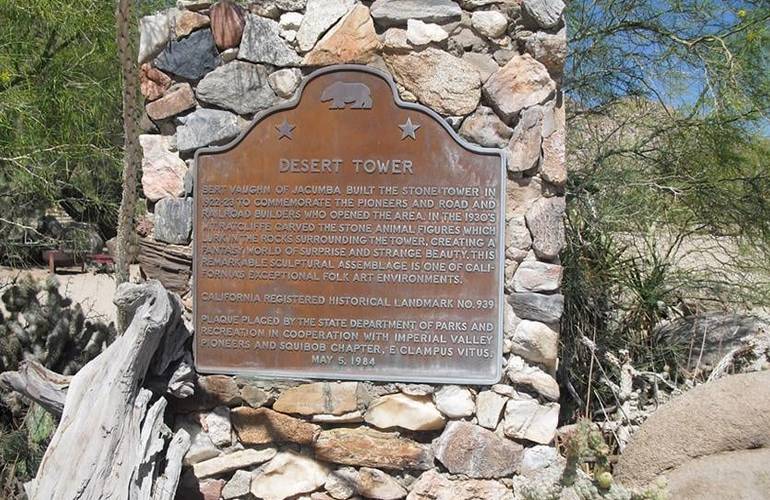 Take In-Ko-Pah Road, about four miles east of Jacumba. Take the In-Ko-Pah exit and follow the signs. Desert View Tower is open daily from 9 AM to 5 PM.

The In-Ko-pah exit gets its name from the Kumeyaay Tribe, who lived in the eastern mountains of San Diego County. In their language, “in-ka-pah” means “place of the mountain people.” An apt name for a landscape that is mountainous and rocky. 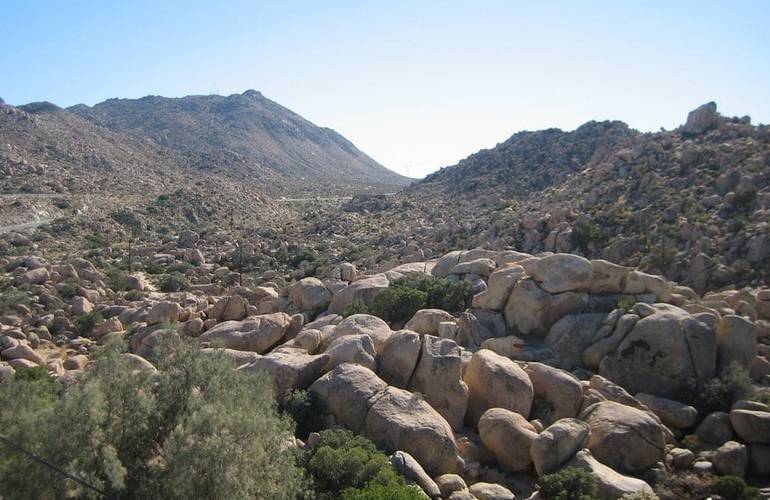 In the Area: Other attractions in the area include Anza Borrego State Park, which can have stunning wildflower blooms in the spring. The Golden Acorn Casino, east of Alpine, has a travel center to pick up gas, snacks, and hot deli items.