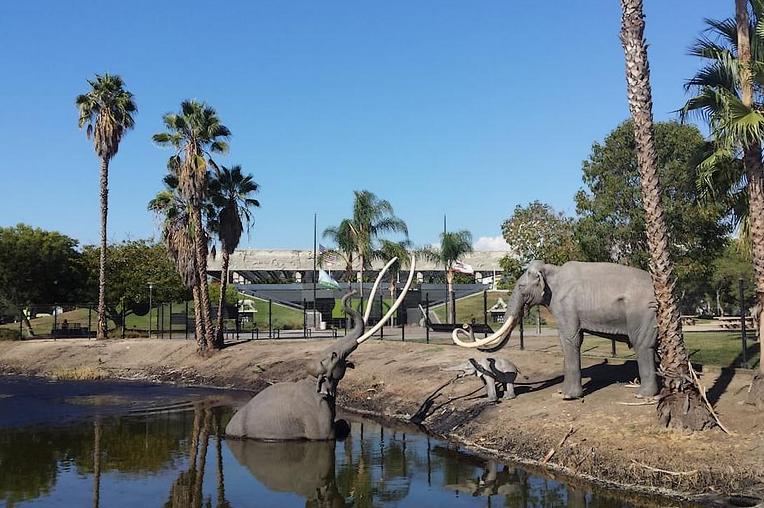 The La Brea Tar Pits are a famous cluster of fossil sites in urban Los Angeles, around the Hancock Park area. Brea is the Spanish word for asphalt or tar, which has seeped up from the ground in the area for thousands of years.

Over the centuries, animals that came to drink the water, which collected on top, fell in, sank into the tar, and were preserved as bones. The asphalt also preserved many very small “microfossils” such as wood and plant remnants, insects, dust, and even pollen grains. 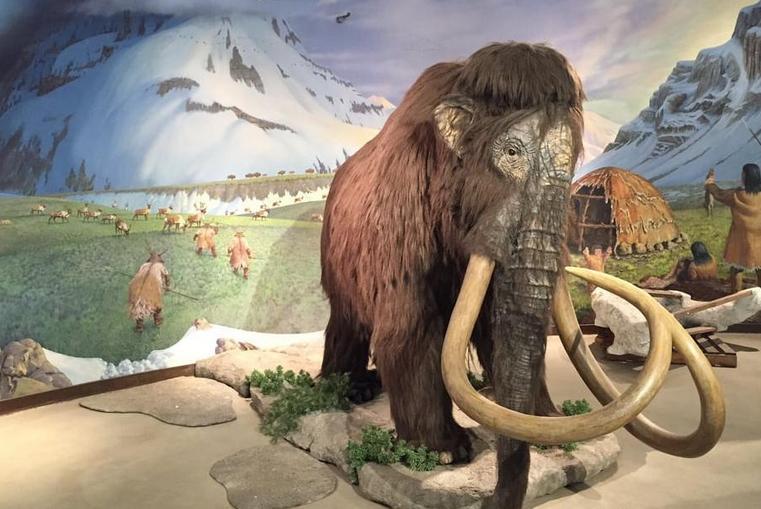 Scientists have used radiometric dating of the preserved wood and bones to estimate the age of 38,000 years for the oldest known piece from the La Brea Pits. Amazingly, the pits still ensnare organisms today. The tar pits are home to several excavation sites.

One of them, just west of the Page Museum is called Pit 91. Digging here began in 1915, and it was decided it would be left as a “showpiece” for visitors.

Unfortunately, after reaching a depth of approximately nine feet, the excavation site suffered repeated cave-ins and floods and was abandoned with thousands of fossils still awaiting excavation. 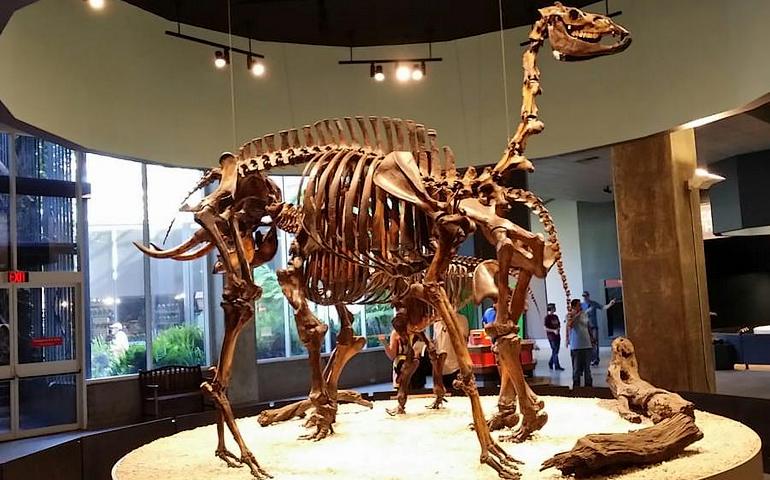 The day of June 13, 1969, became known as “Asphalt Friday” when Pit 91 was reopened with the idea of collecting everything that could be pulled from the earth.

Pit 91 is currently 15 feet deep and it is estimated that the deposit still has another three to eight feet before all the fossils are unearthed. Besides seeing the site and fossils poking from the ground at the viewing station, the Page museum offers a close-up view of many of those discoveries. 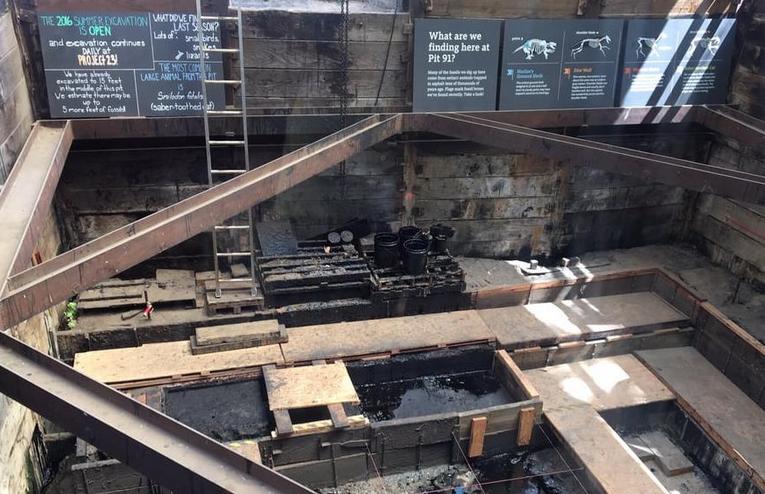 There are plenty of opportunities for learning through a collection of programs geared towards creating a fun atmosphere for children to explore history. The Adventures in Nature Camp offers children, grades Kindergarten to 8th, the chance to explore earth’s animals and cultures through hands-on experiences.

The museum gives behind-the-scenes tours and fun activities focused on kid favorites like dinosaurs and dolphins. 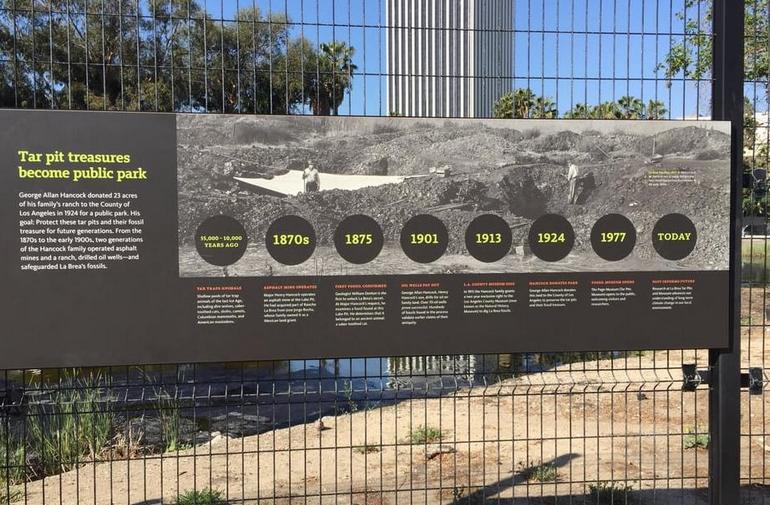 The Adventures in Nature program guarantees to have the world covered. The museum shop offers plenty of souvenirs intended to extend your appreciation. All revenue aids the museum in its acquisitions, research, and educational programs.

Expect to find jewelry and gifts, exclusive note cards, postcards, posters, and a distinctive assortment of books and educational toys for children. The self-guided visit program allows a self-paced tour of the museum at a reduced admission fee for groups. 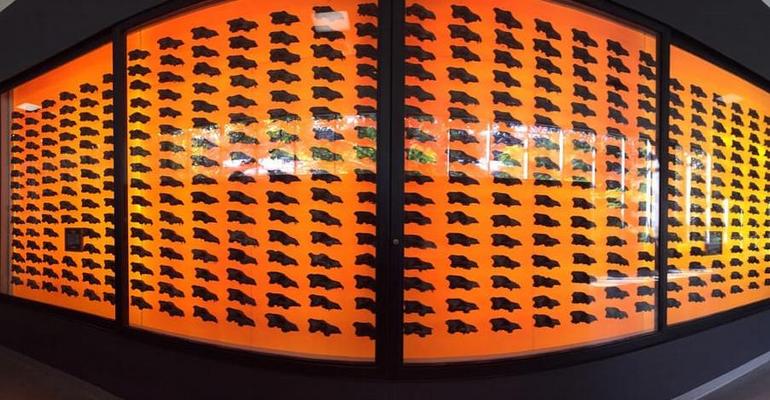 Guided tours are also available for groups of 10 to 25 people allowing you to choose from a museum tour, park tour, or combination tour. Each tour takes approximately one hour. Call far in advance since there are limited spots.

The Page Museum at La Brea Tar Pits is free on the first Tuesday of each month. The Museum’s parking lot is located at the corner of Curson Ave and 6th St, which is directly behind the museum. 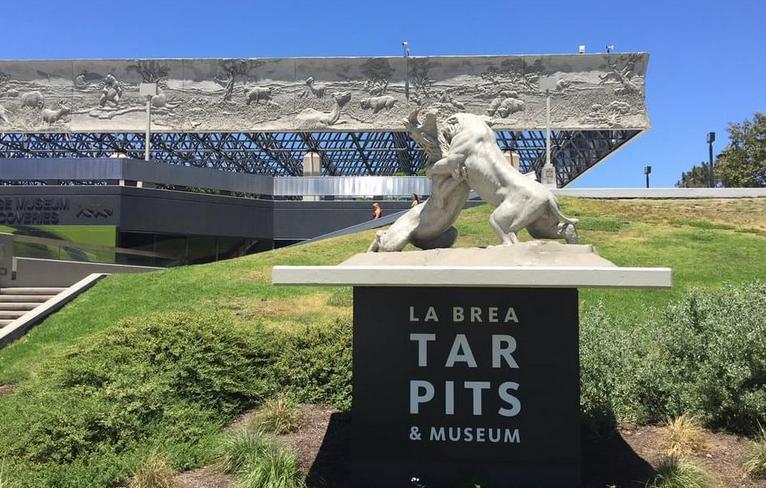 Remember to bring your parking ticket to the museum to receive your validation. Just a word of warning: do not park along Wilshire between the hours of 7-9 am and 4-7 pm or your car will be ticketed and towed even if you are parked at a meter.