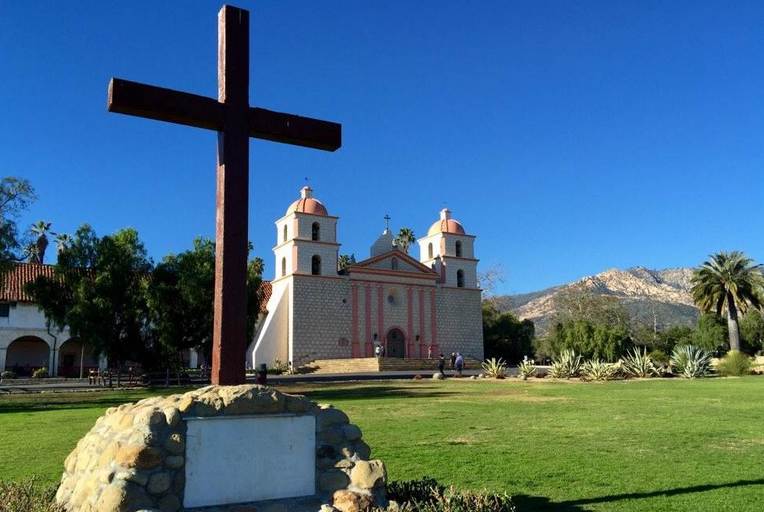 Upon arriving, at Mission Santa Barbara it’s hard not to be inspired as you make your way up the long driveway past the wooden cross erected in memory of Father Junipero Serra to this magnificent 1786 landmark with its Earthy Yellow-colored columns and lush flower-filled gardens.

Overlooking the Pacific Ocean, the mission sits majestically atop the foothills of Santa Barbara and is the town’s namesake’s star historical attraction, and the perfect place for contemplation. 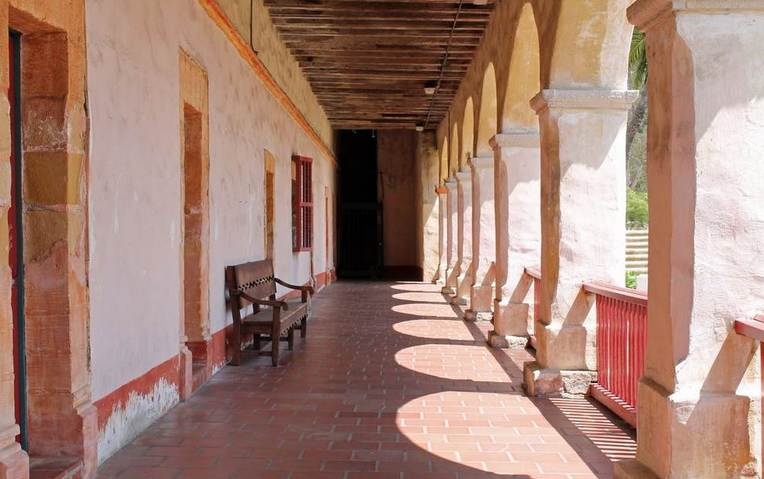 Also known as the “Queen of the Missions for its Graceful Beauty,” the Mission is one of the 21 Franciscan missions in California. The prior nine to the Santa Barbara version was founded by Padre Serra, who had always planned to make this one his 10th but sadly passed away two years prior to its creation.

His successor Padre Fermin Francisco de Lasuen went on with Serra’s plans to make this church, however, and then placed Padre Antonio Paterna, a companion of Serra, in charge.

Today the Mission still serves as a place of worship but is groomed to display the relics of the past, and is also open to the public and offers tours on a daily basis. Self-guided tours may be taken daily from 9 am to 5 pm and docent-led tours may be arranged by appointment. 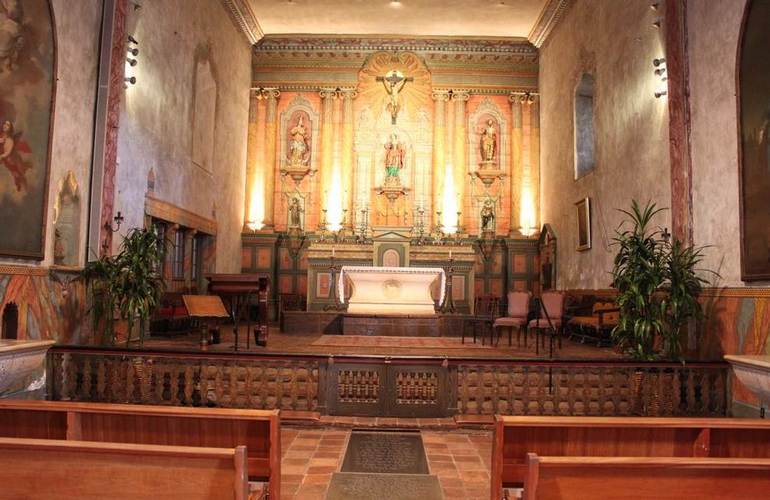 Things To Do Mission Santa Barbara

The interior of the Mission draws the biggest crowds, so you can escape the masses by wandering outside the flower-scented Sacred Garden. The garden is bursting with interesting cacti and succulents, but once was a working area of the inhabitants of the mission.

An important part of the mission complex is the central courtyard, which is anchored around a fountain and ringed by arcades. The 200-year old fountain was once used as a basin by Native Americans for washing clothes, and there is a glazed terra-cotta sculpture of St. Barbara watching over Mary and Jesus in an alcove in the garden’s private portico. 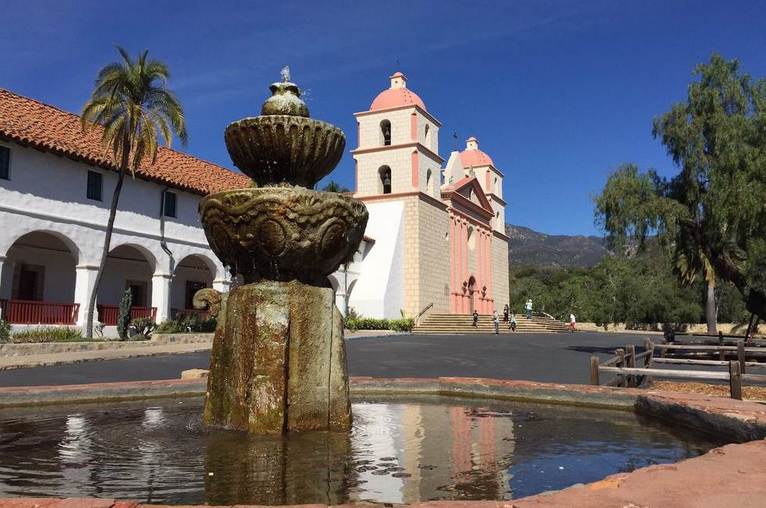 The 1522 masterpiece was just discovered a few years ago in a storage room that was being cleaned out and is now on display for visitors to enjoy. Entrance to the mission includes going through several display rooms, where you can see religious artifacts, implements, and tools for work, and old photos and reproductions.

Further inside, visitors are treated to an astonishing art collection containing pieces from the baroque and neoclassical eras. Nearly every bit of it was imported from Mexico and the countries of South America. There are a couple of exceptions, though, most notably the three stone statues in the museum depicting Saint Barbara, along with the virtues of faith and charity. 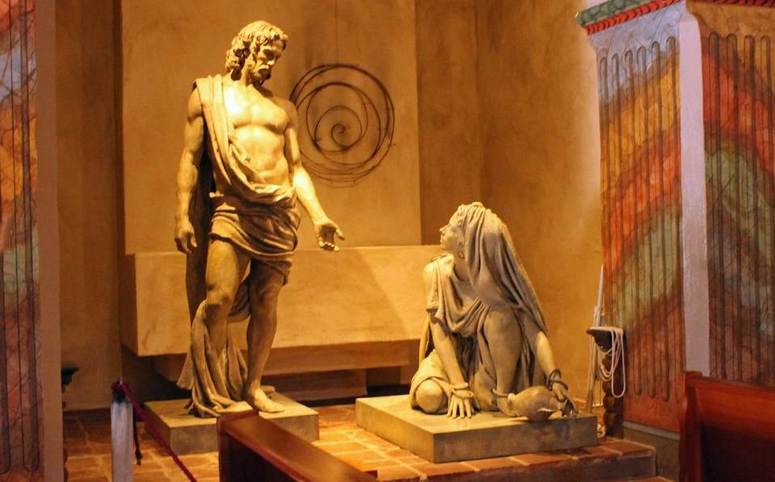 The impressive part is that these were carved by a mission Indian using just pictures in a book to guide him as he created the three-dimensional images. As for the contents of the other paintings kept here, most of them depict angels, saints, and Bible stories. The most notable of these portrays the suffering of Jesus on the cross.

Among the Mission’s other attractions, is the cemetery with its mausoleums, outbuildings including a mill, tannery, and parts of the original water system, as well as a humongous Australian fig tree. 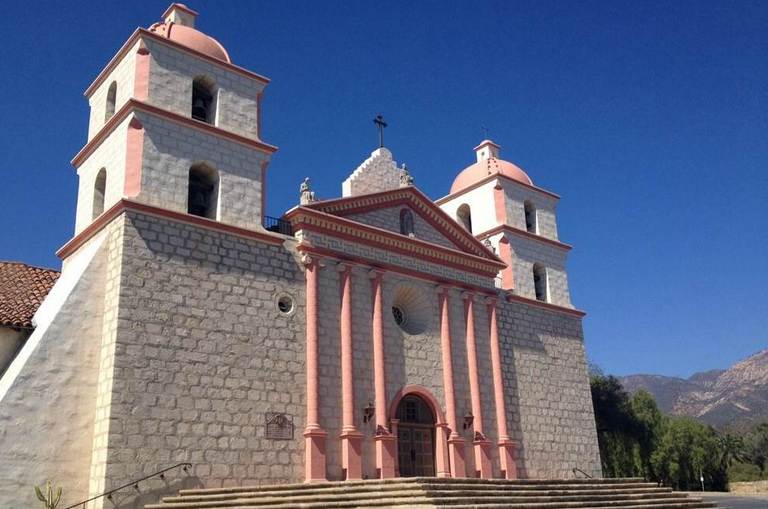 Directly, across the street from the Mission is over 1,000 rose bushes groomed as an offering to the Chumash Indians for the labor they performed for the Padres. It provides a perfect setting for a picnic, pictures, or just to relax.

Mission Santa Barbara serves a reminder to the path of the Padres in California history and is one of the best-preserved in the California mission chain. So a visit to this amazing place should not be overlooked. 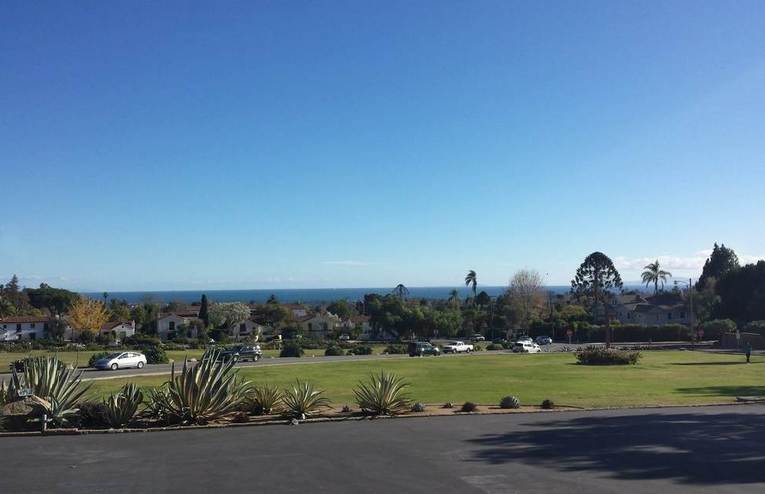 Getting to the Mission

Plan on spending about two hours visiting the mission and its beautiful grounds. For a modest charge, a ninety-minute guided tour is offered on Thursdays & Fridays at 11:00 am, Saturday at 10:30 am.

Things To Do In Santa Barbara

Pearson's Port is a floating shack that sells fresh fish, live crab and lobster underneath the Pacific Coast Highway bridge that crosses over Newport

Hotel Del Coronado or the "Del" has been a San Diego Landmark since 1888. Located along the San Diego Bay in Coronado this hotel is one of the most

If you are looking to spend a day soaking up the essence of California, then it’s time for a Malibu beach day trip. The 21-mile strip of oceanfront

SeaWorld San Diego is focused on the ocean and its magnificent creatures. A medium-sized park, at 21-acres, that easy to walk across, with rides,

If you are looking for a new twist on a dinner theatre then Teatro Martini Dinner Theatre in Buena Park California could just fit the bill. Prepare