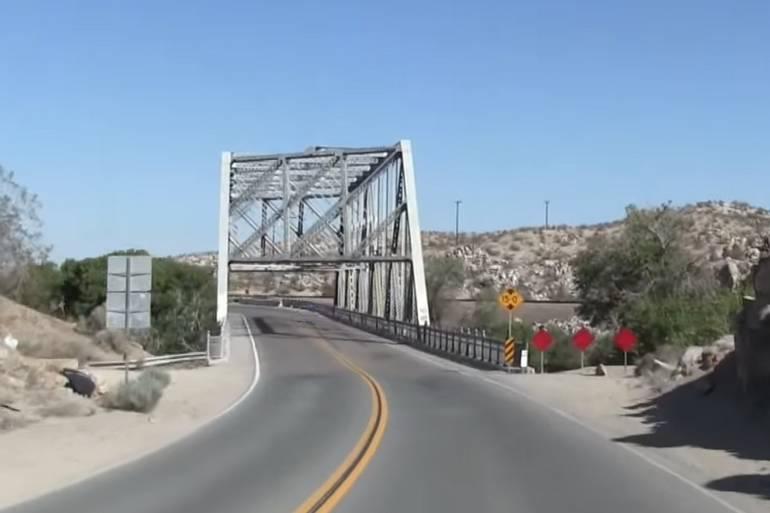 Just west of Needles, California, is an all but totally abandoned roadway section called National Trails Highway. For years this roadway served as the main artery for travelers heading west from New Mexico to California.

Named for the coast-to-coast highway that predated Route 66, today, the National Trails Highway has only a few ghostly shadows which remain. Our road trip takes us along this iconic highway through the Mojave Desert.

Starting in Victorville, California, the National Old Trails Highway crosses the Mojave River on a 1930s steel truss bridge and heads east to what remains of Oro Grande’s town. Built on the hopes and dreams of the area’s early prospectors, the town would have dried up completely if it hadn’t been for the discovery of limestone.

There are several old buildings here, including the Iron Hog Saloon and the abandoned Mohawk Mini-Mart, and the largest antique mall in the high desert – the Antique Station. There is also an old cemetery that dates back to the town’s mining days.

Next up, about 4 miles down the highway, is Elmer’s Bottle Tree Ranch. Elmer is still around to greet visitors but judging by his beard’s length; he gets up there in years.

Elmer created his bottle tree masterpiece out of junkyard pieces and hundreds of bottles. The bottle ranch is a must-see as you drive along the National Trails Highway. 24266 National Trails Hwy Oro Grande, CA 92368. Be sure to leave Elmer a tip in the mailbox before you continue your trip.

Heading further east is what remains of the town of Helendale, with a few buildings still standing amid the rattlesnakes and sagebrush. Among them are the remains of the old Burden’s Store and a U.S. Post Office, one of the oldest buildings on Route 66, built-in 1926. There are also the ruins of Potapov’s Service Station and Auto Court, originally built in 1943.

East of Helendale, sparse remnants of the Mother Road can still be seen as travelers make their way towards Barstow — one of the bigger cities along this stretch of the National Old Trails Highway. Named for the president of the Santa Fe Railroad, Barstow thrived along with the nearby successful mining towns of Daggett and Calico during the late 1800s and grew into a major rail center by the turn of the century.

By the 1920s, the Santa Fe Railroad had all but totally taken over Barstow’s Main Street, and in 1926, Route 66 sent automobiles barreling straight through the middle of town. A must-see in Barstow is Casa Del Desierto, the Harvey House Railroad Depot that opened in 1911. The depot has been restored to near new condition and houses a Route 66 Museum and the Western America Railroad Museum.

Once beyond the Barstow city limits, the National Old Trails Highway becomes littered with ghost towns and relics from the past. The first being the crusty and dusty town of Daggett, 12 miles to the east.

Founded in the 1860s, Daggett boomed when silver was discovered in the nearby Calico Mountains and was later supported by three borax mines. A few of the original buildings are still standing, which include a blacksmith’s shop and hotel.

Next is Newberry Springs, and a Route 66 survivor — the Bagdad Cafe — still a famous watering hole and eatery for travelers today. Near Bagdad are the remains of Fenner and Essex’s towns, where travelers can still see the post office and the ruins of an old gas station.

Amboy Crater has a paved parking lot these days before you used to park on the side of the highway. It’s about a four-mile round-trip hike to Amboy Crater and back from the trailhead. We recommend only this hike during the fall or spring. During the summer, 100 degrees temperature is the norm, and there is no shade.

Once owned by Roy and Velma Crowl in the 1930s, Amboy has a few remaining buildings, including the gas station, post office, and the original Roy’s Motel and Cafe. The motel is closed, but there is a gift store that sells Route 66 and Amboy merchandise and souvenirs. Gas is available during open hours. The tiny town of Amboy is a great place to snap some photos.

About four miles east of Amboy are a pair of marble lions, one male, and female. No one is quite sure how they got there, but they have become a popular Instagram stop. The Lions are set back from the road on the east side of the highway. People leave trinkets and notes on the lions. There also used to be a logbook at the base of one of them.

Continuing, travelers will pass by what’s left of the Road Runner’s Retreat, a once-popular cafe just outside Chambless. The cafe closed its doors in 1995. Chambless is just about a ghost town with most of the buildings in ruins.

From Chambless, it, a 35 mile drive through the desert until the old National Trails Highway joins up with Interstate 40. Then on to Needles, where you will finally see some signs of life. 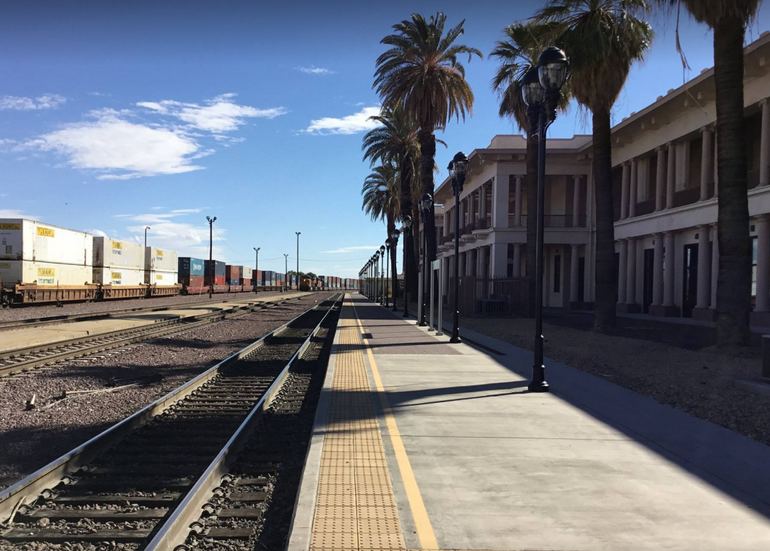 Route 66 passes through the center Needles, where several old icons can still be seen today, including the recently restored El Garces Fred Harvey Hotel. The building now serves as an Amtrak Depot also the Needles Area Transit office. During its heyday, El Garces boasted 60 guestrooms, a lunchroom, and a dining room. El Garces is located at 900 Front Street Needles, California.

The distance from Victorville to Needles is around 175 miles and is best traveled during the day. There are a few services and minimal overnight accommodations along the way, so travelers should plan accordingly.