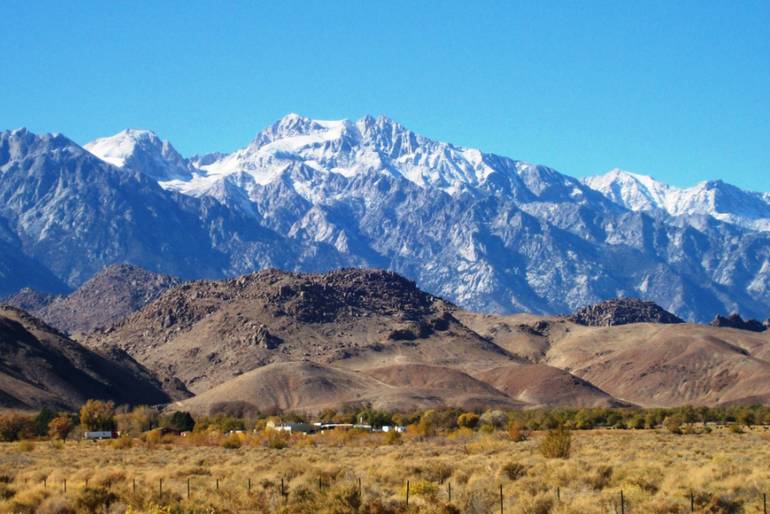 Lone Pine was founded in the 1880s to provide provisions to the local miners. The Carson Colorado Railroad which serviced the Owens Valley dropped off supplies and picked up produce grown in the surrounding farms and orchards.

After water was diverted to the Los Angeles Aqueduct in 1913 the farms dried up and the miners moved on. A second boom returned in the ’20s when the nearby Alabama Hills was used as a backdrop for more than 250 films. 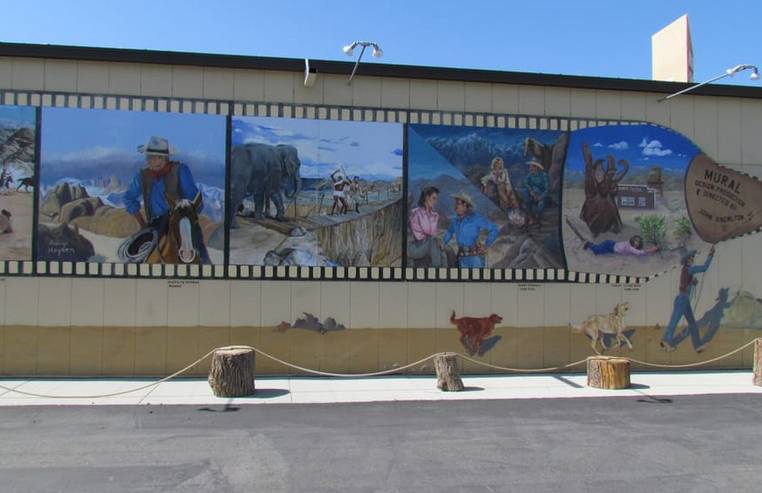 Today Lone Pine is the jumping off point for Mt. Whitney trails, over 10,000 people attempt to climb the 14,496 peak each year. Lone Pine also hosts the Lone Pine Film Festival, each October. Lone Pines offers spectacular views of the Sierra’s and the Owens Valley.

Much of the local economy is based on tourism, as the town is located several major tourist destinations. Mount Whitney, Mammoth Mountain, Alabama Hills, and Manzanar National Historic Landmark are all within day-trip driving distance. 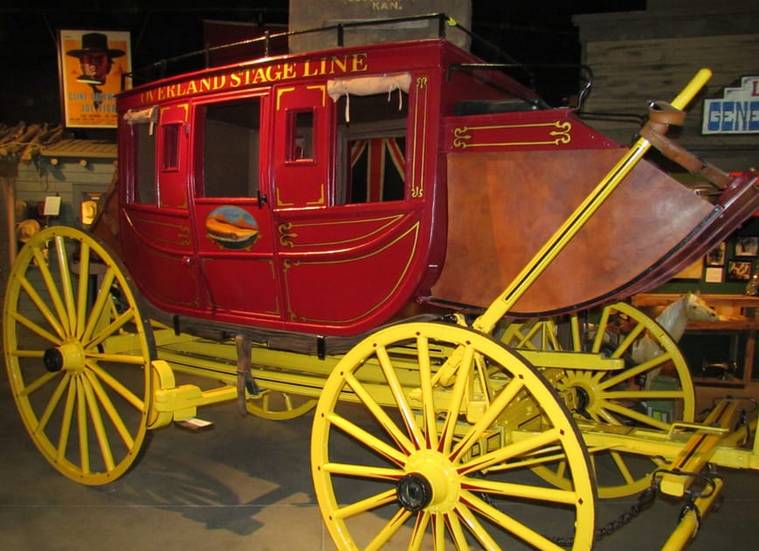 The Museum of Western Film. Starting in the early 1900s hundreds of movies was filmed in the Alabama Hills The museum housed a huge collection of artifacts from that time including costumes. posters, stage coaches, autos, film props, and much more. Museum of Western Film 701 S Main Street (Highway 395) 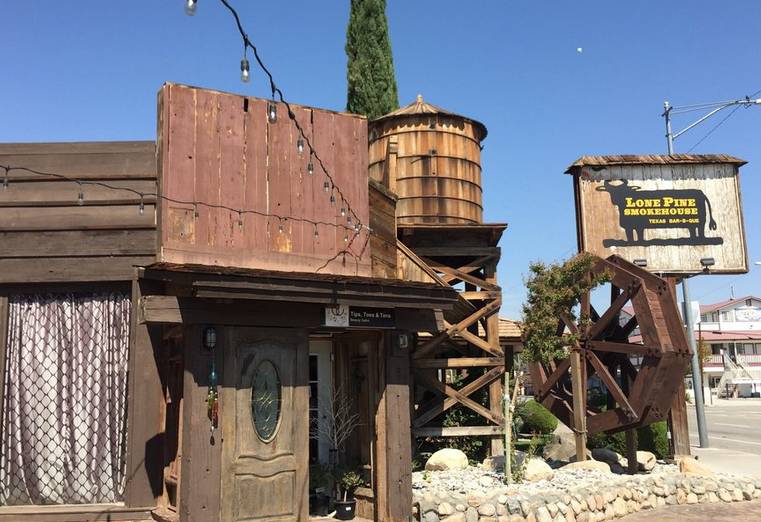 Lone Pine Smoke House. Open noon to 8 pm Thursday thru Monday. Serving up ribs, pulled pork with Mac and cheese and coleslaw on the side. Inside and patio dining. 325 S Main Street.
The Grill 446 S Main Street. Serving breakfast, lunch, and dinner. Seasons Restaurant 206 S Main Street. Upscale dining at the foot of Mount Whitney opens for dinner only. 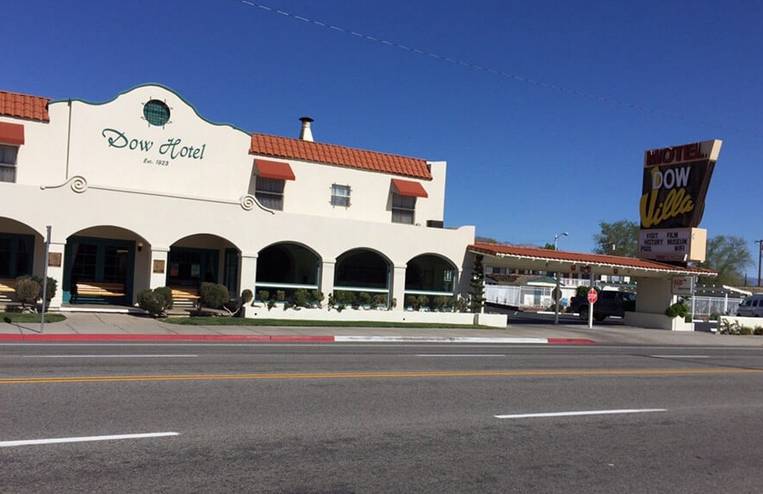 Where to Stay in Lone Pine

There are several motels in town including the Dow Hotel where Jon Wayne and numerous other movie stars stayed while filming western movies in the nearby Alabama Hills. Other choices include the Timberline Motel, The Portal Motel, Trails Motel, Mt Whitney Motel, and Lone Pine Budget Inn.0 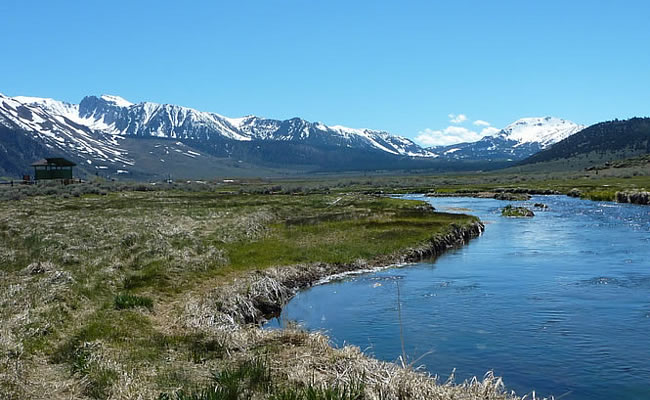 Lone Pine trout season opens two months earlier than anywhere else in the Eastern Sierra. It is kicked off with the Early Opener Trout Derby on the first Saturday in March. Both steams and lakes are stocked regularly by the California Department of Fish and Game with Rainbow and Brown Trout.

Cottonwood Creek is one of the most popular fishing areas near Lone Pine Turn west at the Cottonwood Power House Turnoff about 10 miles south of Lone Pine. Keep to the left as you cross the Los Angeles Aqueduct. The best fishing is from the campgrounds at the powerhouse intake to the end of the road. 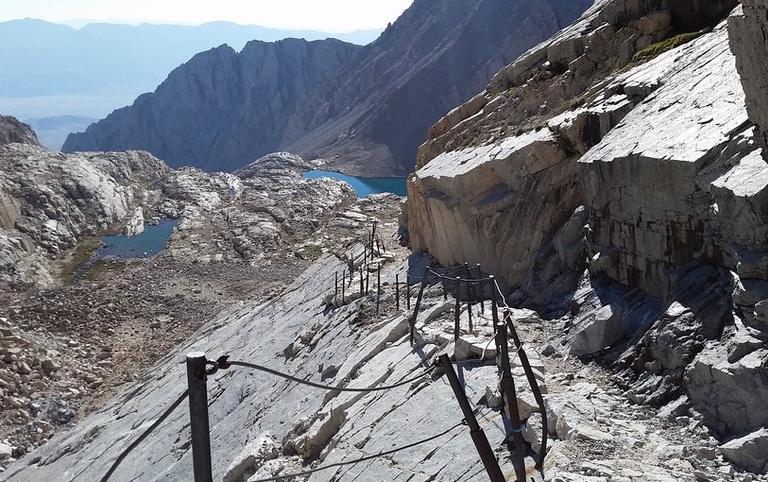 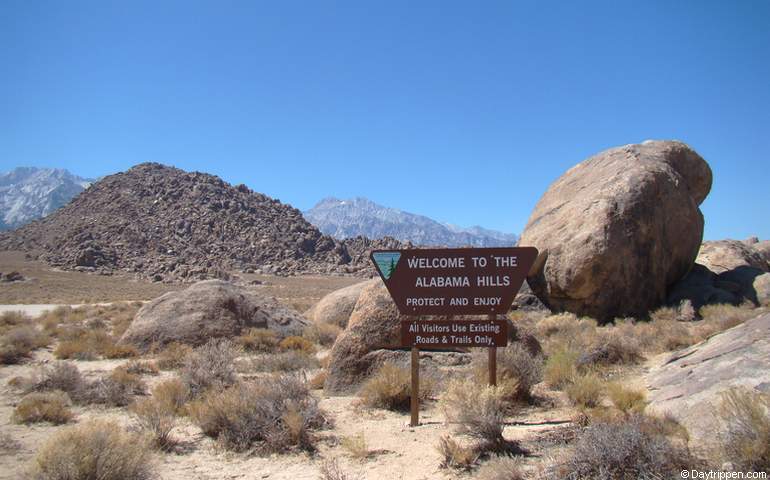 Alabama Hills are located to the west just of Hwy 395; take the Portal road. Great place to explore or hike on the many dirt roads that run through the hills. 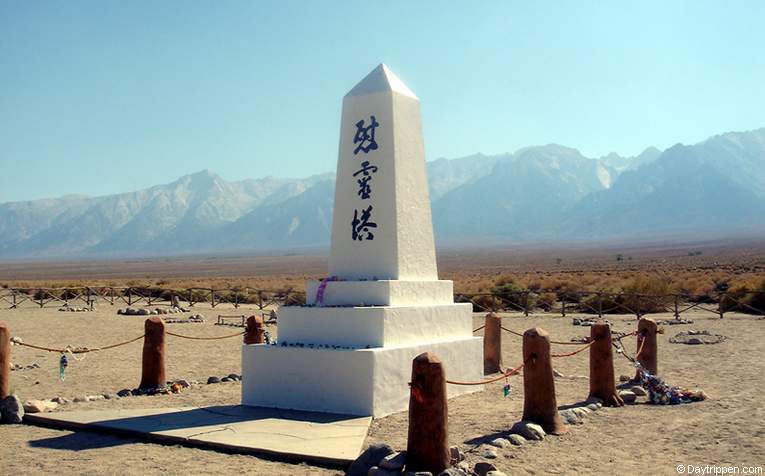 Lone Pine is the nearest town to the Manzanar National Historic Landmark. It’s on Highway 395, about five miles south of Independence

Lone Pine and most of the Owens Valley have a high desert climate characterized by hot summers and cold winters. January temperatures range from the middle fifties to upper twenties. July temperatures range from the upper nineties to lower sixties. Snowfall averages only five inches annually.Lone Pine California is situated along Highway 395 60 miles south of Bishop. 200 miles northeast of Los Angeles.

Things to do and See California Eastern High Sierra 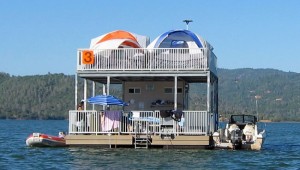 Situated in the beautiful Sierra Nevada foothills, just east of the city of Oroville, and tucked away at the base of the Plumas National Forest, is majestic Lake Oroville. With 15,500 surface acres and 167 miles of forested shoreline, this 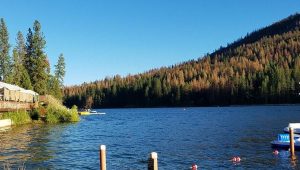 Long considered by campers, hikers and anglers to be the hidden gem of the Sierra National Forest, Bass Lake Recreation Area is one of Northern California's most popular outdoor recreation spots. Bass lake a great place to escape the hustle and

Protected by the mountains east of central California's Salinas Valley, Pinnacles National Park is home to a collection of unique rock formations, hidden caves and beautiful peaks and valleys created by an extinct volcano. The park is an 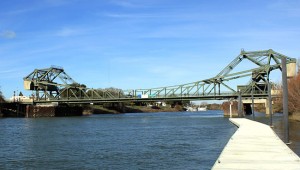 With hundreds of miles of navigable waterways, the Sacramento River Delta, also known as the California Delta, provides a plethora of outdoor exploration opportunities, including boating, bird watching, camping and more. The Sacramento Delta is a

Only 3 ½ hours from San Francisco and 2 hours from Sacramento, Emerald Bay State Park preserves one of the loveliest and most photographed areas of Lake Tahoe. The Bay was carved in granite by the movement of glaciers. It is only one mile wide and