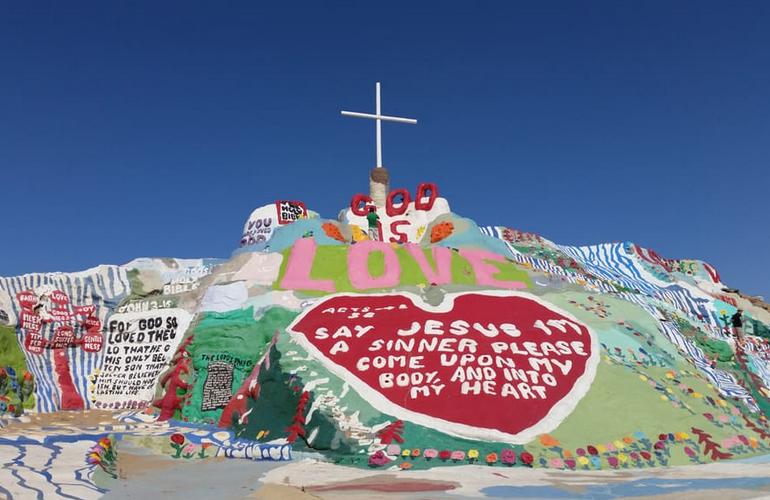 There’s Mt. Sinai, and then there’s Salvation Mountain. On the barren badlands east of San Diego, a 30-foot high, 100-foot wide concrete and adobe mountain is covered in religious slogans and over an estimated 150,000 gallons of lavish multi-colored acrylic paint.

Located near the salty shores of the Salton Sea, this interactive landscape is the creation of a single man—Leonard Knight—whose failed attempt at launching a hot air balloon made from bed sheets with bold letters emblazoned on the side stating, “God is Love” in the 1980s, led to the 26-year construction of his glorious mountain. 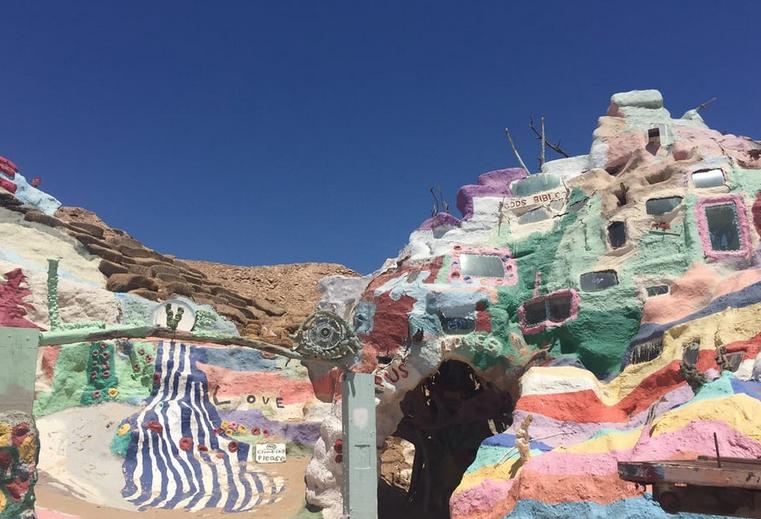 Today, Knight’s mountain is somewhat of a biblical Wizard of Oz, a testament of one man’s faith drawing thousands of devoted followers year after year, many of who have donated hundreds of gallons of paint that Leonard used to repaint the faded parts of his vision.

Arriving at Salvation Mountain, a patchwork of colors greets visitors on concrete, Adobe, tires, hay, and other random things with a big red “God is Love” on a white backdrop, and just below, the Sinners Prayer and substantial red heart. 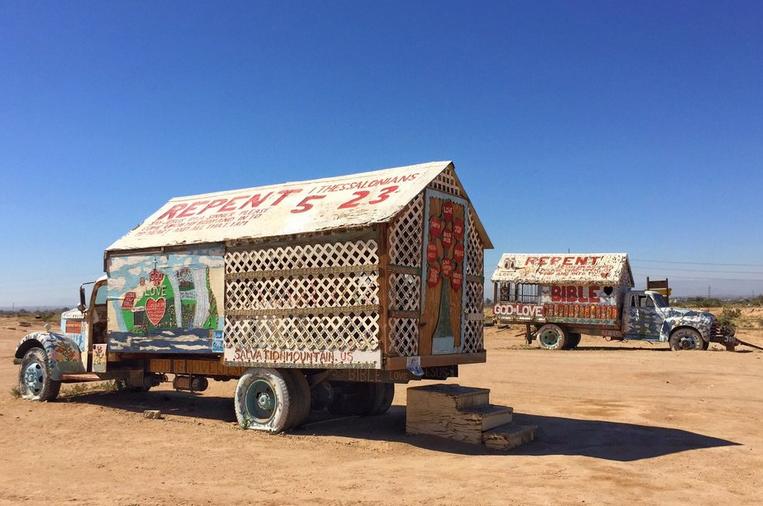 Visitors can also climb the yellow brick steps carved into the mountain, ascending to the upper terraces to capture some unique photo opportunities of the surrounding area.

Knight, who lived just a stone’s through away from his mountain in an old Chevy truck, would personally greet all visitors and willingly provide a tour of his peak and his latest creations, including nearby hogans (huts created from Adobe), a replica of his partially inflated balloon, and a multitier museum. 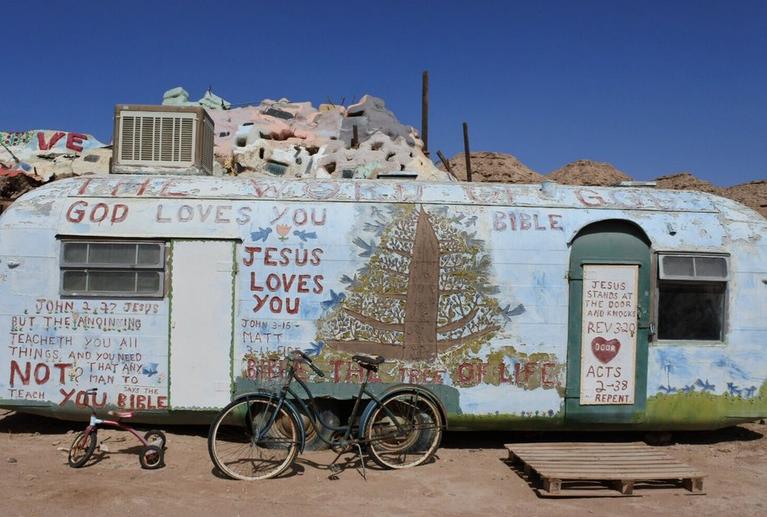 At 80, Knight left Salvation Mountain due to declining health. He passed away at a nursing facility in El Cajon at 82, but the mountain is still open to visitors every day until dusk and remains completely free.

Leonard Knight passed away in 2014, so volunteers are now guarding the mountain to prevent anyone from vandalizing the property. The site’s future is unclear; however, a nonprofit corporation has been set up to help preserve Salvation Mountain. 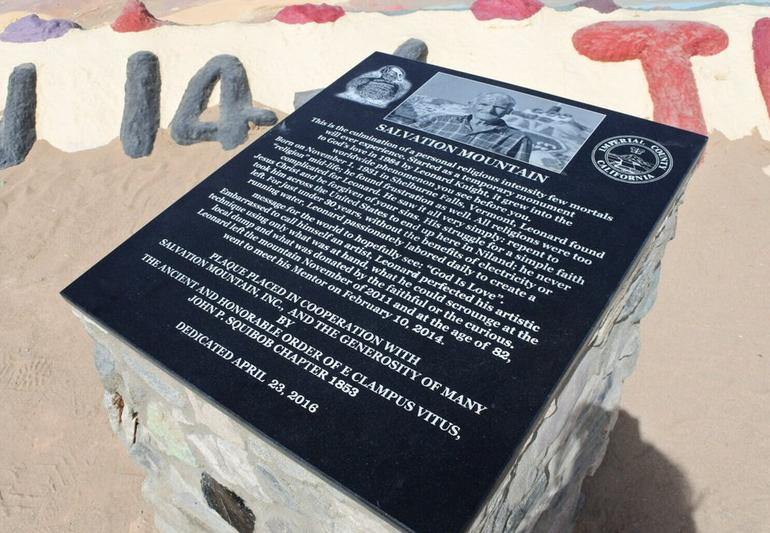 Getting to Salvation Mountain is half the fun as you must traverse a two-lane road just east of Niland, a ramshackle old farming town known for its annual Tomato Festival and Parade. 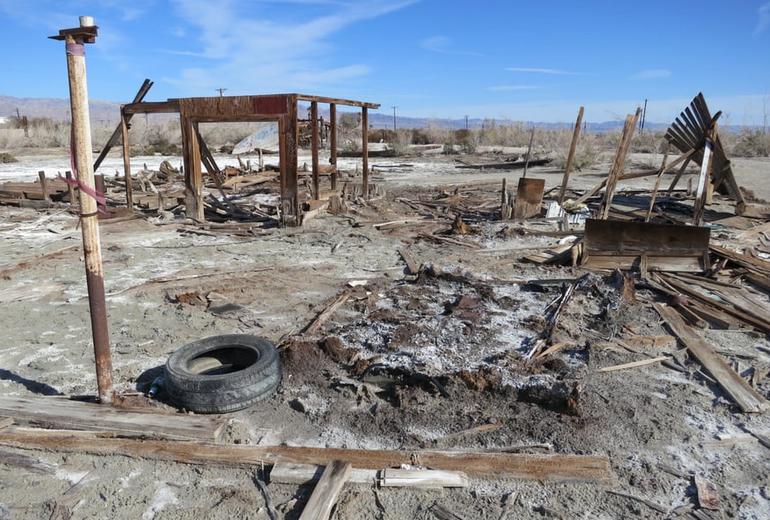 The near-deserted town is home to a pair of other exciting sights, starting with Bombay Beach with its half-submerged abandoned buses and vehicles.

Like something out of a post-apocalyptic movie, there are also the remains of dozens of trailers and houses that sit rotting, half-buried in salty mud, along with what remains livable in this watery wasteland, with its shoreline of pulverized fish bones. 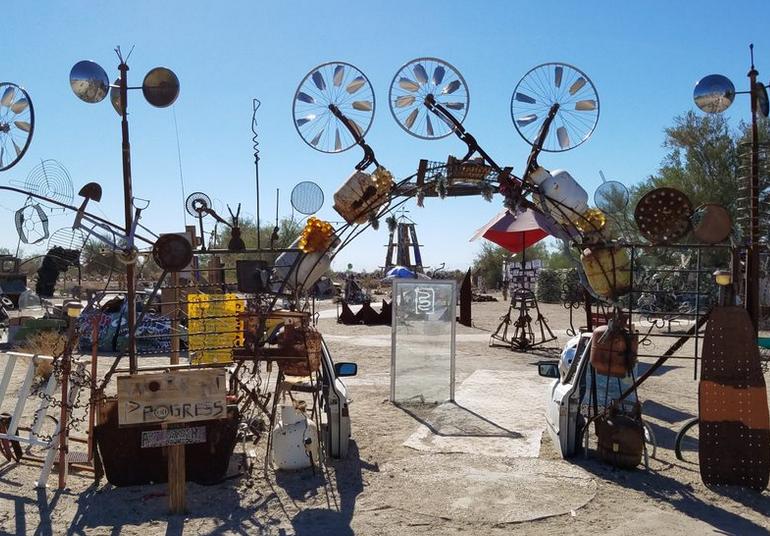 Slab City is just beyond Bombay Beach, with its WWII-era Marine facility and nearly 2,000 “snowbirds” that live rent-free in their trailers and campers scattered among squatters in concrete remnants. Many are refugees of the Great Recession. 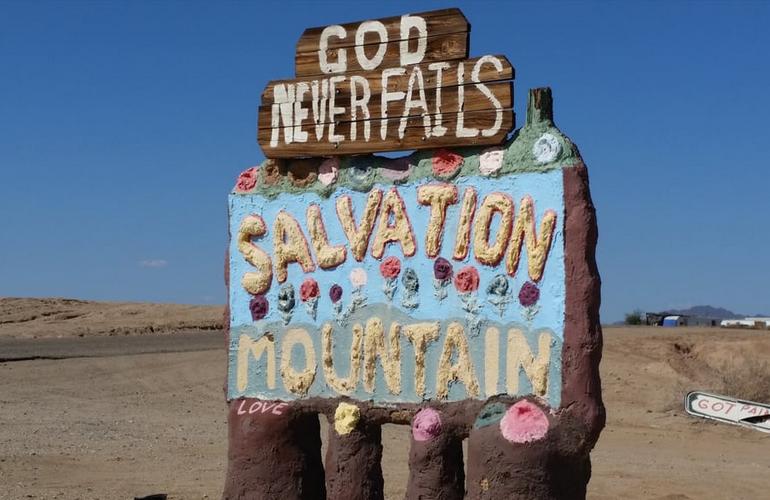 Mr. Knight refused donations of money and labor from supporters who wished to change his message of universal love to favor promoting a different message, and the monument remains precisely as it was built. Salvation Mountain is one of the most visited tourist attractions in Imperial County.

Leonard Knight passed away in 2014, so volunteers are now guarding the mountain to prevent anyone from vandalizing the property. The site’s future is unclear; however, a nonprofit corporation has been set up to help preserve Salvation Mountain.

Getting to Salvation Mountain

Salvation Mountain is about a two-hour drive from San Diego and three hours from Los Angeles. Salvation Mountain has something for everyone and is a beautiful tribute to folk art regardless of one’s religious identity or lack thereof.

Unusual Things to do in Southern California